At lunch, I was asked how well I like my small group and I fessed up that I was skipping the group portion of the retreat in favor of personal time.

After lunch, I drove the few miles to Barnegat Lighthouse with a fellow retreatant named Cecilia. She had visited the park once before a long time ago. She surprised me by saying that she would walk up with me. I took each step as slowly as I could and at the first landing, she declared she needed a break. I encouraged her to rest. By the second landing, she turned back. I continued on, reaching out to the railing with each step to pull myself up. Gasping and coughing, I burst out the door at the top and startled a man with a tripod taking photos. Not a clear day, not a great view. And windy! 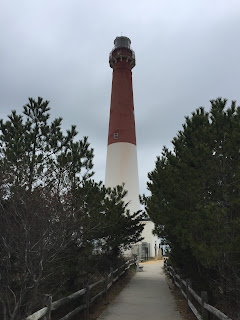 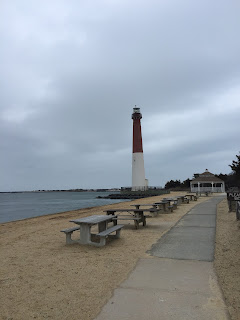 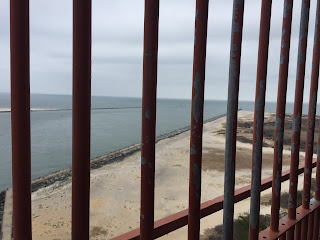 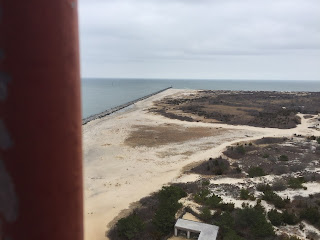 On the drive back, my passenger asked how I liked my watch. She said she wanted one for herself really bad but was trying to justify the cost. I told her it's great to swim with because it tracks distance, laps, calories, heart-rate, arm strokes - way more information than I'll ever need. But since it was a Valentine's Day gift, I can't help her with justifying the cost. I only know that my husband is an excellent bargain hunter. She had pretty much made up her mind that she would get herself one.

The outing took an hour. I sat in my room, near an open window and read until it was time to drive to St. Francis of Assisi for confession.

One car was in the church lot with the occupant still inside. I figured I could be done before he worked up the courage. I entered by the side door that had a light on overhead. I walked past the tabernacle and turned towards the rear of the sanctuary to catch Fr. Kevin in his brown, cinctured habit, standing in the doorway of the sacristy taking a huge sip from an insulated bottle. I didn't exactly startle him, though I walked briskly and we've never met.

By way of an informal introduction, I mentioned I was visiting the area, on retreat at Harvey Cedars and he said, to his knowledge, it was a nice facility and how nice to be visiting Long Beach Island. We sat in the sacristy. Switching into my reading glasses and pulling out the schedule portion of St. Francis's website bulletin on which I had written my examination of conscience-type notes, I explained that I would read from the paper and he said that was fine. It's a formula either way, whether read or recited from memory.

My favorite part of the rite is when we're talking simultaneously to God: I'm making my act of contrition and he's pronouncing the words of absolution. The hard part of naming my sins is done, praying the homestretch towards that wonderful grace.

The other man went in after me while I said my Our Father. Then he left after saying his penance. I moved out of Father's sight, towards the tabernacle, to take more time. Others trickled in, but no one mistook me for being on queue. At one point, Father wandered from his post so I directed a penitent seeking him to the back. Father came out, calling, "I have a customer!" It was an hour before mass was scheduled to begin but the musicians were on site warming up and sacristans were preparing the altar.

Dinner would be my last meal at the retreat center so I was sure to tip the kitchen staff. I made the difficult decision to sit next to a woman whose children had attended private school with mine years ago. I can't even say that it was fun to catch up with her. Since it was more than ten years ago, we weren't aware of the youngest child in the other's family! She was at the retreat with someone as no one ever goes to these events alone. So after a few more polite questions, she turned her full attention back again to her friend.

I spent the evening in my room, listening to the light rain outside, the gusty wind and the occasional goose. It was too cold to sit on the porch. I read from a book I'd brought by Christian Smith (reviewed by Mark Noll1 at First Things). Sometimes my reaction is "Preach it!" I love it when he advocates for church membership and commitment. Other times, I see problems or a double standard in his criticism, "He's being too harsh."
1 "As someone whose respect for the strengths of Catholicism has grown steadily over the last four decades, and yet whose intention to live out his days as a Protestant also has grown stronger over those same decades, I have a particular interest in the questions Smith raises." - Mark Noll
Posted by Moonshadow at 5:42 PM
Email ThisBlogThis!Share to TwitterShare to FacebookShare to Pinterest

Moonshadow
Millstone Twp, NJ, United States
I have lived in NJ since 1992 and I like it. My husband and I have three sons and a daughter. I worked for AT&T for 13 years before opting to be at home. I attend St. Joseph's Parish here in town and taught CCD for nearly 10 years before the sons came along. I spend very little time watching television but am on the computer regularly. Education: MS Software Engineering, Monmouth University, 1997 MA Theology, Georgian Court College, 2002 -- Coursework