That it was the beginning of Lent meant only I was wearing ashes on my forehead through everything.

A public school bus in the parking lot crept alongside me as I walked towards the church for Bible study. I heard the doors open and the driver ask me, "What kind of building is that, a religious center?" I stopped and turned to answer and as I did, he saw the ashes, "Yes, it's a bible church," an answer which I suppose meant nothing to him, specifically. "You're Catholic, I see. Well, me, too." Naturally. Then he changed the subject to politics, how Christie made him a Republican.

Two hours later, my cell phone was ringing when I reached my car. I had to pick up my son at school because he had had a seizure. Completely incredulous, I drove around the corner and picked him up. He slept on the way to the emergency room, 50 minutes away. He walked in with me when we arrived. He was still in his school uniform: sweater, tie, penny loafers, right next to me in my ashes. We probably looked the Catholic school family part. I was downplaying the whole thing:

The school nurse thought I should bring him here but I'm sure it's nothing.

I had his lunch with me and we were taken to an examination room. They started an IV and let him eat his lunch. I supplied insurance cards and medical information. The staffer deduced my religion from my ashes, "Catholic?" Yup.

My husband showed up rather quickly but he couldn't stay long. As he was saying his goodbye to our son, we noticed that he looked like he would cry. His mouth was firmly closed but seemed to be moving slightly as if he wanted to speak. Then he turned his head sharply up and back to the right and his open eyes followed. I unbuttoned his shirt but otherwise I stood there and felt my own lips trembling as my husband called out to him.

He ran for the nurse and doctor who came and observed. They immediately gave him Lorazepam, I don't know how much. It made him sleepy. After my husband left, they ran a CT scan which was normal and tried to elicit a seizure during a non-invasive EEG. I think the Lorazepam may have interfered with that. Also, I noticed that my son wasn't clear on the tech's directions. She used a strobe light but I saw that he was closing his eyes! 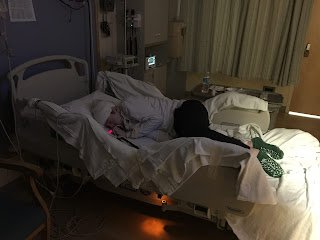 I wasn't being intentional about fasting for Ash Wednesday but my circumstances prevented me from getting anything to eat until about 4 in the afternoon. I was subsisting on sugary soft drinks until that time. After the EEG and CT scan, waiting for the results, I made my way to the hospital cafeteria. I bought my son some fried chicken strips and a tuna sandwich for myself. Most of the cafeteria staff wore ashes. Carrying my food back, I passed a Roman Catholic priest who did a double-take and said, "Oh, well, hello there!"

They moved us to a larger hospital and ran video-EEG monitoring overnight. I think that they intentionally kept us up late, well past 11:00, so that his fatigue would trigger a seizure. We had to answer many of the same questions as before. I was tired of answering. The nurse asked which religion we practiced and would we like a visit from the hospital chaplain? As much as I would have liked to speak with someone, I declined it. I wiped my ashes from my forehead because I couldn't think of anything worse than an "Ash Thursday." I made myself comfortable in the window seat for the night. 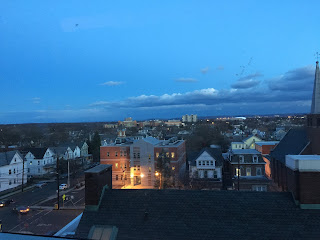 I was skeptical that they would have any success in capturing a seizure but they did. I watched the video the next day: he sat upright in bed and the nurse came in, asking him if he knew where he was. He said, "I'm in bed," which wasn't a good enough answer. Then he said, "Room 5005," but they wanted something else. Eventually he just lay back down and they left.

The next morning, I got out early for a Mass down the street at St. Peter's. This is directly near the university. I was early enough that I thought the turnout would be light. Instead, I was soon surrounded by the young men of the campus ministry. The young women sat on the other side of the center aisle. They were all very devote, as young people are, as we all once were. The following morning, which was Friday, I was sure to sit on the proper side, with the other women.

For the rest of his brief stay, he ordered his food for each meal with plenty of lead time. We borrowed some board games and played Battleship and cards. He also borrowed video games and my husband brought his laptop and iPad from home. 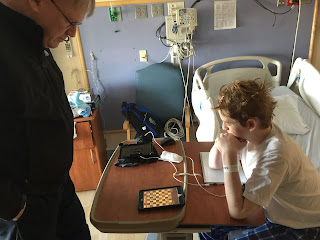 I gave him a list of his school friends' texting numbers so he could keep in touch. That gave him a lot of joy. The kids sent e-cards to the hospital that moved him emotionally. 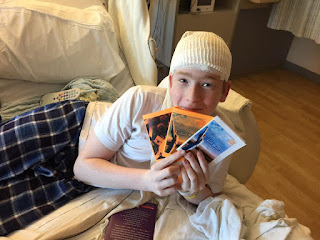 Posted by Moonshadow at 11:54 PM
Email ThisBlogThis!Share to TwitterShare to FacebookShare to Pinterest

Moonshadow
Millstone Twp, NJ, United States
I have lived in NJ since 1992 and I like it. My husband and I have three sons and a daughter. I worked for AT&T for 13 years before opting to be at home. I attend St. Joseph's Parish here in town and taught CCD for nearly 10 years before the sons came along. I spend very little time watching television but am on the computer regularly. Education: MS Software Engineering, Monmouth University, 1997 MA Theology, Georgian Court College, 2002 -- Coursework